When I grow up, I want to be an outhouse racer.

So now you know…and that niggling little worry at the back of your mind that I might have lost it has now been confirmed.  But wait, it gets much better.  Not only are we going to talk about outhouse racing today, we’re also going to cover the wonderful absurdity of seeing a reindeer head mounted on the wall right next to dusty plastic Christmas decorations including Santa and sleigh.  It fits right in with liberal do-gooders and miners and prostitutes and entrpreneurs and criminals all thrown in together…and in some cases two or three of the aforementioned in a single personality.

Have I mentioned how much I LOVE Alaska?  And in case you’re worried that I’m never going to get around to the outhouse races, don’t fret.  Adonica and I once took a photograph of a row of porta-pots near the start line of a race, honey buckets without their own lines of humans.  Never did I see a more beautiful sight than all those pristine potties just waiting for me to make a choice about which to visit.  The photo still holds a place of honor in my album of race memories.

As is the case with most distance runners, outhouses, sanicans, honey buckets, porta-potties and other portable accommodations to the roadside needs of every runner are a virtual obsession with me.  If you listen carefully to my race day stories, you’ll notice that about half of them have something to do with a bathroom visit or a need for one that was left unsatisfied.

If you’ve already given up on this post, I forgive you.  It’s just that for people who have found themselves in the position of needing to be inventive in the arena of bodily functions and personal hygiene on the fly (no pun intended) there are some really good stories out there.  Maybe this is part of why I like mushers so much…a story about hanging your butt off the back of the sled at 40 below establishes immediate kinship with the runner who has experienced trying to find a way to sit with quadriceps nearing complete failure.

The actual adventure that prompted this post was a visit with Peggy to the Chatanika Lodge for dinner.  I have to admit that when she suggested Chatanika Lodge, I actually asked if I needed to dress up for dinner.  She must have thought I was nuts.  Lodges in Washington, you see, tend to be a bit upper snuff.  You still wear your sweaters and jeans, but you need to be seen in the perfectly matched designer version.  At the Salish Lodge where I used to work, there was actually a dress code in all three restaurants, jacket required in the nicest of the three.  Imagine a Bond Babe lounging in a chalet in Switzerland someplace and you’ll get the gist of what I was thinking.  My three day old jeans and t-shirt with the stretched out neck weren’t quite in line with the image.  I can only plead temporary insanity or disorentation…I clearly forgot where I was for a bit.

Peggy, being a good egg, didn’t laugh and off we went.

It’s really hard to fully describe the kitsch of the Chatanika Lodge without being there, but I’ll give it a try.  For those of you from New Mexico, imagine a hybrid of Cedar Crest, Frontier Restaurant, a trading post somewhere near Gallup and a friendlier sort of biker bar.  Eclectic doesn’t quite cover it.  Then add in the heads and skins of dead animals because it is, after all, Alaska.  Toss in a pinch of Holly Hobby country fabric stuff, a healthy layer of dust, some old license plates and a ceiling full of signed dollar bills from patrons in years past and you’re starting to get close to the feel of the place.

The Christmas decorations (including the lit-from-inside plastic Santa and sleigh angling up the wall toward the mounted head of Rudolph’s dead cousin) weren’t from December 2008 or even December 1998.  In fact, if there hadn’t been plastics involved, I would have bet on them being real gold rush relics.

Peggy and I couldn’t figure out whether they had just created a homey looking shell around the Atco trailers that used to serve as rooms for patrons to sleep off a good time or if the Atcos have actually been hauled off and real rooms built.

The burger and fries were the best I’ve ever tasted, the ambiance absolutely perfect, the music better than Motown, LA or Nashville and the pure laughter straight from the belly the stuff that heals most of life’s woes, at least for a time. 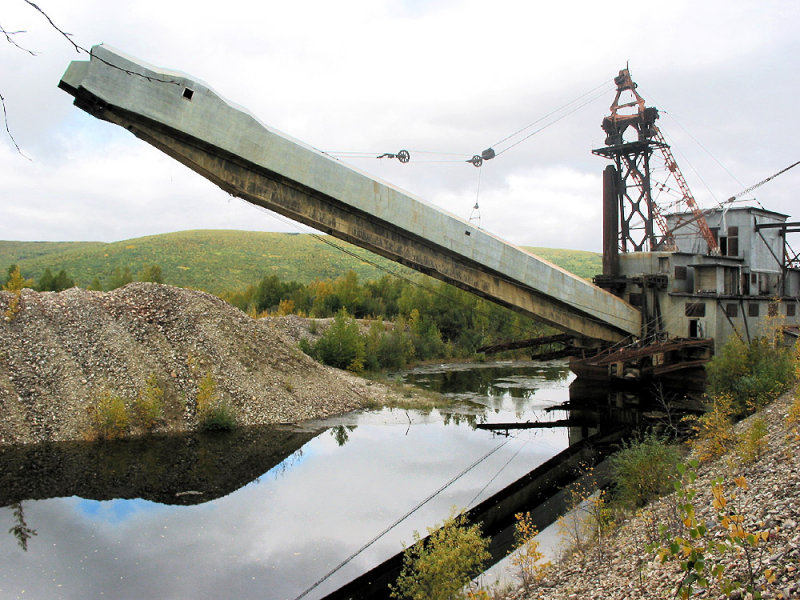 Before we sat down to eat, we headed across the highway fromthe Lodge to look at an old dredge.  Peggy mentioned that she thinks the dredges look like dinosaurs and I have to agree, particularly from this angle.  I’ve read quite a bit about the gold rush and the transition into dredging to try to continue getting returns out of areas that were mostly tapped out, but it’s a much more powerful impact to actually see one of the dredges sitting in the middle of nowhere.  Peggy had pointed out the piles of tailings all along the river on the way up, but it wasn’t until I saw the dredge that I actually started to realize what 27 miles worth of rock pile really meant in terms of how long these monsters were in operation and what the impact of the mining really was.  From the perspective of many, a necessary evil to ensure survival in a harsh environment with no other means of making a buck and staying alive, but a huge impact still.  It’s fascinating to literally see where the dredge ran out of water and was just abandoned.  It’s a lot like looking at Southwest ghost towns, but with a slightly different twist.

So on to my dream of becoming an outhouse racer.  I’ve done some research and there are quite a few races out there to challenge the newcomer to the sport.  In fact, outhouse racing is not a single sport but rather a multi-sport venture.  There are outhouses worn or carried by runners, outhouses on skis, outhouses on go-cart frames.  There are races and even series of races all over the country, although for some reason Michigan and Alaska seem to figure most prominently.  In a showdown between the two, my money would go on the folks from Alaska who, after all, know their outhouses.

If you’d like to get a whiff of what the sport entails, here are a few links to check out:

If you’ve checked some of these out, you’ve probably got a good idea by now of why I would view outhouse racing as a potentially fun way to rack up more sports injuries.  But I bet you’re wondering what prompted the whole idea in the first place.  It’s simple, actually, and the same thing that starts all of these nutty pursuits.  I’m willing to run many miles wearing a replica of an outhouse because I really, really want the nifty sweatshirt that says “Chatanika Lodge:  30 Years of Outhouse Racing” and being a bit of a running geek, I’m not willing to wear the shirt until I’ve earned it.

See you next March at the Outhouse Races…WoooooooooooooHooooooooo!